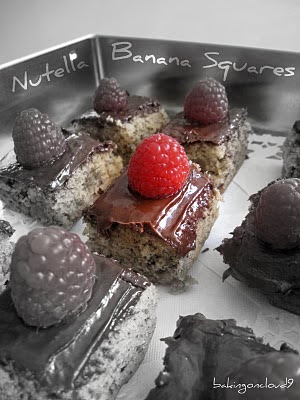 The last thing I did in 2010 and first thing in 2011 is this nutella banana squares.... nothing elaborate and in fact a recipe which I tried before. Except that previously i baked in a muffin cup and it had a streusel topping, I decided to make mine in squares and slather lots of nutella and put on a cheery-red raspberry :)) Baking the banana cake was a breeze but I did have a tough time cutting up them in squares of 4cmx4cm as the nutella kept sticking on the knife. In the end, it was so messy that the last 2 pieces of squares was almost beyond recognition ;0
*P.S. The main reason for baking this was because of the very riped mini bananas sitting in my kitchen, and screaming to be eaten or else to be fed to the bin! 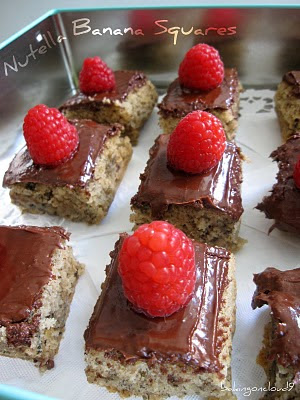 Hi Esther,
Very happy new year to you too!

Ohh.. banana and nutella such a great combo! I hardly resist the taste. Happy new year to you!

Hi busygran,
I think the fridge did help but I was too lazy and running short of time to put back to the fridge when it melted quite badly :p

Hi grace,
Long time no "talk", and very happy new year to u and your family ;-))

i love nutella anything! this looks and sounds delish!

Hi crustabakes & edith,
Thanks for leaving your lovely comments here, very much appreciated!