At last, i got to try out 2 things yesterday at my dad's place .... (1) the broiler can be used to bake a cake (happy!!), (2) the orange chiffon cake which was a newspaper cut-out recipe and i had wanted to try for some time.

Now that i had to bring my little one for his music class every Sat, i got wake up early in order to get a ride from T, before he heads to his office. Which means to say that if i wanted to bake anything at my dad's place, i got to plan in advance, including preparation of baking tools and ingredients to bring over. Luckily my dad's place have most of the baking tools/ bulk items like weighing scale, broiler (to replace the oven), mixer, etc as my mom used them to whip up delicious food, snacks, kuehs, huat kuehs ;-) Till now, I can still find traces of 'remnants' on the weighing scale and mixer. As for the broiler, it had been serving us very well for at least 20-odd years, that is how reliable old gadgets are. I always remember one 'old' mixer which my mom bought when she attended some cooking classes when we were in our primary school, but i threw it away as it's slightly mal-function and we had got a new one for her. She would frequently bring it up how i threw her things away..... now that she's at a better place, somehow i won't want to throw any of these items away. 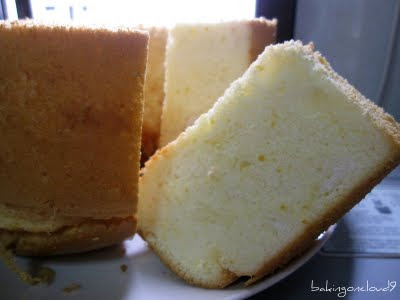 Anyway back to the orange chiffon cake, the recipe is straight forward and very easy to follow, without compromising on texture and taste. Except for the egg white which i had over-beaten slightly which i thought would fail the cake, it didn't, luckily. In fact, the cake rise so much higher than the 17cm tube pan that i don't have a flat chiffon cake. Otherwise, the cake is very springy to touch. On the day itself, the cake exudes very slight tinge of orange taste, but the following day, the orangey taste got deeper. 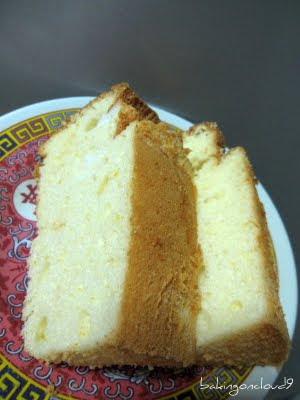 2. Separate the egg yolks from the egg whites. (abt 240ml egg whites)

4. Make a depression in the centre of the cake flour mixture, add egg yolks, orange juice and oil and stir until well combined.

5. Add orange zest to the mixture and stir well.

6. Beat egg white and cream of tartar on high speed until stiff.

7. Add in cake batter to the egg white gradually and fold gently in batches, until well mixed.

9. When done, remove the tube pan from the oven and invert on a cooling rack and leave to stand for 2 hours.

10. Remove the cake from the tube pan by running a knife along the perimeter of the pan and inverting the cake onto a plate.

Hi birdutmasali & Sonia,
Tks for dropping by and your kind words ;-)
Cheers,

You've reminded me that I've not made orange one for such a long, long time! Yours looks good, soft, moist & fluffy!

In a CakeBox said...

Hi Pei-Lin,
Look forward to seeing one in your blog real soon. For that, do i get a slice from you? ;-)
cheers

Pls email me at brendachiew@yahoo.com
would like to invite u to my blog. Thnks