I've been meaning to bake my own Cinnamon Buns for ages but never get to do it so far. Recently, there are few bloggers who 'tempted' me again with their hot-from-oven cinnamon buns, you can see from Reese Kitchen, Do What I Like. With some time to spare today, I finally get to bake these delicious cinnamon buns. It is so easy and I'm wondering why I took so long to bake it. 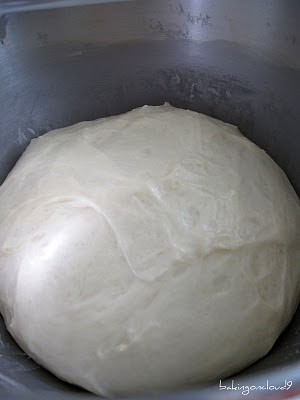 I was enjoying the entire process - from preparing the ingredients to cooking the water roux to mixing the dough and proofing, and rolling, cutting. Not too sure whether am I the only one, but I like the smell of yeast, it totally lift up my spirits! Seeing the 1st and 2nd successful proofing made me super uber happy! 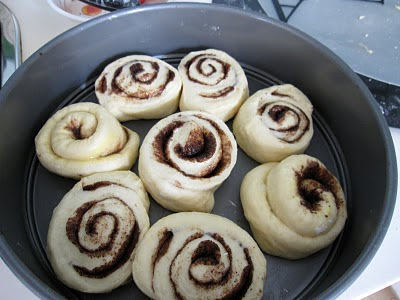 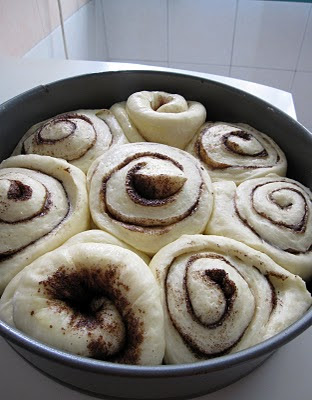 40 mins later... after 2nd proof
When the buns are fresh out of the oven (almost immediately cos I'm running late on schedule -again!), I grabbed one of them, snapped a few pictures and rushed out of the house. I was munching the bun whilst walking to the bus-stop. 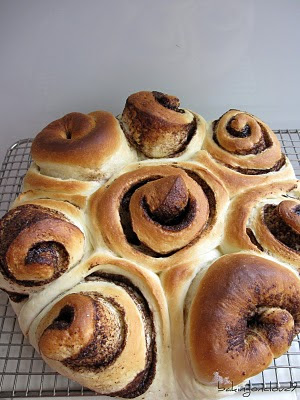 1. Cook 125g water with 25g bread flour at medium low heat, keep stirring until becomes thicken and no lumps left. Cook until 65 deg C, or if you do not have a thermometer, cook until mixture resembles baby porridge.
2. Transfer to clean bowl and cover with cling wrap to prevent skin forming.
Note: Water roux can be stored for 2 days, and if colour turn dark grey, to discard.

1. Put all the ingredients (A) and (B) and knead until it form a dough.
2. Add the butter little by little and continue the kneading process until smooth and elastic and the dough does not stick at the side of the mixing bowl.
3. Proof for 40 minutes in a clean bowl cover with cling wrap.
4. Mix brown sugar and cinnamon powder until well combine. Set aside.
5. Flatten the dough with your hand and roll it out in longish shape with a rolling pin about 25cm x 40cm.
6. Brush butter on the surface of the dough then sprinkle cinnamon-sugar mixture onto the dough evenly. 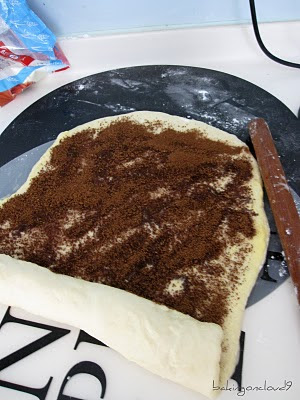 7. Roll it up like a swiss roll and seal it tightly.
8. Cut into 8 equal portions using lightly floured knife.
9. Place dough in a 9" round cake tin and cover with a cling wrap. Proof for a further 40 minutes. 10. Bake at 180 deg C preheated oven for 15 minutes. 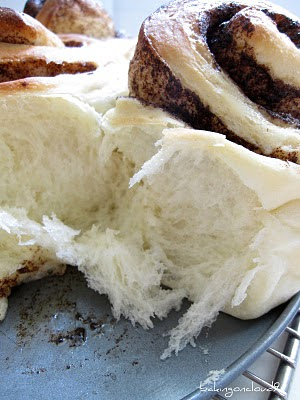 It turned out cottony soft and yummy, and simply easy to churn out. Sweetness is just nice so there is no need to reduce the brown sugar. But if you like sweeter cinnamon buns, more sugar has to be added. 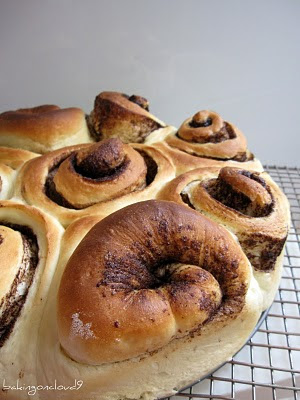 Enjoy over a cup for black coffee - heavenly!

i'm getting green eyed with envy on your bread texture sigh how i wish i can make a bread successfully!

i always find it amazing how breads can proof so much! when i saw your 2nd photo, i was thinking, the buns are so small, how to fill the pan, and when I saw the 3rd photo i was like whoah nice :)

Hi J3ss,
You don't have to envy me. Get to the kitchen now and stay baking this!!

Hi Janine,
Oh yes, it was WOW when I see them rise so much! Not too sure whether did it make a difference because I put the dough very near to the hot water flask when proofing?

These cinnamon buns looks fantastic! So soft and yummy looking. I wish I have piece now with my coffee.

I love cinnamon buns too ! Your buns looks sooo soft... like those cotton candy texture... Make me hungry and drooling for it now...

your bread look so soft and fluffy. how i wish my bread could be as soft as your. i feel like eating cinnamon bread now. ahahah.

Hi Quay Po Cook,
Thanks for dropping by and your lovely comment :))

Hi Joyce,
They are really cottony soft, try making them yourself!

Hi Janice,
You can give this recipe a try and they taste exceptionally good right out of the oven!

Hi, pleas check this out.
http://preciousmoments66.blogspot.com/2011/03/long-overdue.html

Hi sweetlicious,
I don't mind sharing with u the next time I bake this :))

Hi Edith,
Thanks for passing me this award!!

Hi Layla,
They are not that tough actually. To get 30gm egg, I beat one egg in a bowl and measure, it's slightly more than half an egg. Happy trying!
Cheers,