It has been a long time that I've updated my blog. During this period of absence, I've done very little baking. Not too sure what I had been up to, but I'm left with little time and energy to bake after busy work week, dramas. It also doesn't help that I've no idea what I want to bake. 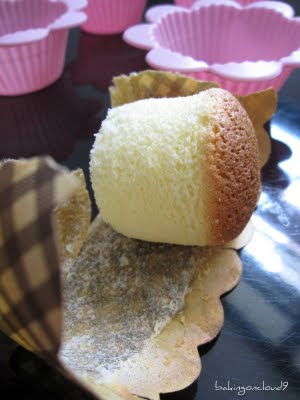 Whatever, I've a block of cream cheese that's going to expire very soon, and also that my younger brother had organised a housewarming on Good Friday, it seem a perfect calling for me to bake something on this day. This 'something' took a while to conceive as I'm totally clueless these days ~~ but definitely has to include cheese ~~ which is this month Aspiring Bakers #6: Say Cheese, hosted by Noms I Must. It was only till the eleventh hour that I decided to bake and finally deciding on baking this Souffle cheese cupcakes. 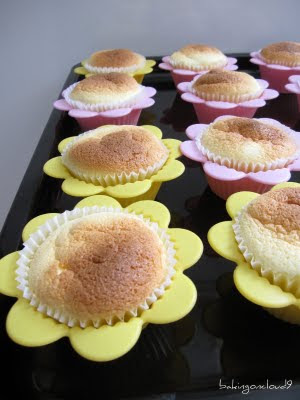 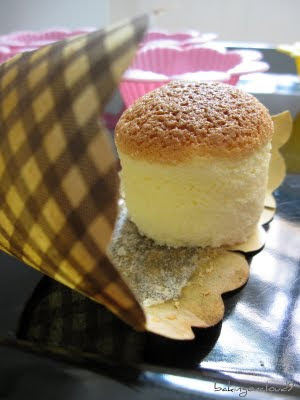 1. Preheat oven to 150°C. Place a large tray of hot water inside the oven just below the shelf where the cheesecakes are to be baked.
2. Line 15 muffin holes with paper cups or use cupcake holders.
3. Soften cream cheese with milk and oil in a bowl placed over simmering water, or in a double-boiler. Whisk until smooth, remove from heat and let cool until lukewarm.
4. Beat egg yolks with 25g sugar until combined, beat in lemon juice. Gradually whisk in cheese mixture to combine. Lightly whisk in sifted cornflour, mix well.
5. Beat egg whites until foamy. Then gradually beat in 60g sugar, spoonful by spoonful, until firm but just under stiff peaks stage.
6. Fold 1/3 of the egg white mixture into the cheese mixture until thoroughly mixed in. Repeat two more times with the remaining egg white mixture.
7. Spoon batter into the prepared muffin cups using ice-cream scoop, filling each cup nearly to the rim.
8. Place the muffin tray on the shelf just above the tray of hot water.
9. Bake for 35-40 minutes, or until the tops of the cheesecakes are lightly browned. Test doneness when skewer inserted come out clean.

I made these cupcakes before & they were really yummy! Yours look lovely! ;)

Now look at what you’ve done … you have me seriously craving for a piece of this
Looks fantastic...yummy

Making these in little cuppies make it look very pretty ! And the texture looks as if it will melt in the mouth !

love the crusty top and the soft inside, yum!

Thanks for the recipe;) im pretty sure i will loved it.

So lovely! May I know how long can I keep this cheese cupcakes? Should i keep it in the fridge?

very nice, hope one day i can try making these souffles!

Hi lena,
This is good and you must give it a try some one! Hope to see it in your blog soon (^.^)

hello, those cheese cupcakes looks lovely! btw where did you get those pink & yellows cups? they look cute!

I try ur recipe yday night & my girls love it so much & finish all by today morning. Thanks for ur sharing & I will try more of ur recipe.

Hi Quizzine, I try this recipe yday night & my 2 girls love it so much. Thanks for your sharing.

Hi My lovely wardrobe/ Annie,
I'm glad you had tried this out and love them!

Hi, can I omit the lemon juice? I don't like the lemon..

Hi Chell,
The lemon enhances the cake taste & it's quite subtle. If you really don't like lemon just add a little.

I'm baking soufflé cheese cupcakes now! Must put in fridge before serving is it? How long?

Hi Chell, u can serve them either way. Happy baking!

I bake soufflé cheese cupcake...is nice...my niece even want second serving...but mine not so structured like urs, a bit slanting or too soft I think..why is it so..is it because I use muffin paper that is softer and lighter in texture...

Would you be able to upload a recipe with measurements in cups instead of ml?