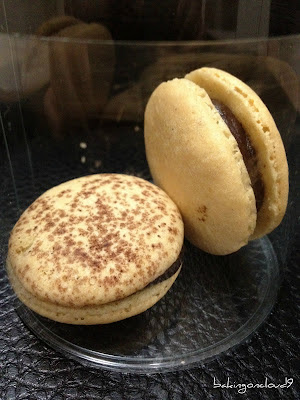 I didn't expect I would have time for any baking after Zak's birthday celebration last Sunday. I guess I really need a little baking-time to off-load some work stress. As we don't cook at home, there's no eggs in the fridge unless I plan to bake something. After baking my boy's birthday cake, I'm left with 3 eggs. Not wanting to throw them in the bins, I separated the egg white/yolk yesterday, of course with half-mind yearning to bake a macaron or two if time permits. 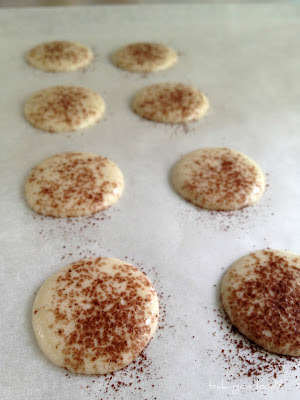 Other than baking, another good way to de-stress is definitely spending good quality time with my little boy. We don't have to spend dozen to be happy or lavish on expensive food to feel fed, a simple bus ride and a piece of roti prata made boy & mum extremely contented! Our happiness is not dampened by the 'lousy' roti prata we had at Jalan Kayu, even my boy lamented that it's really not nice. We then proceeded onwards to Ikea to satisfy his incessant-liking-for-long-bus-rides. Both of us had our retail therapy at Ikea, followed by lunch of hotdog and donuts. When we stepped out of Ikea, realised that it was raining so heavily. Our initial plan to take a return bus trip was thwarted as there's no covered shelter to the bus stop. It's actually quite a relieve (for me) as it's a good excuse to take the cab home after hours of walking and heavy stuff to carry. 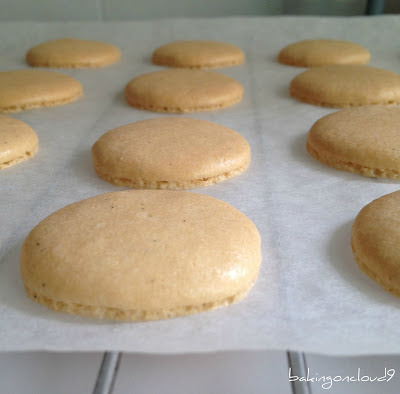 Back to the macarons, they were done when it's daddy's turn to bring little boy for their fun bus-train-LRT-bus rides on a lazy Sunday. I was half doing work & half macaroning. And half the macarons turned out feet-less, and the rest with short-feets. Nothing is wasted (except one odd shell that is left), they were slabbed with godiva dark chocolate ganache, waiting to be matured and devoured days later. 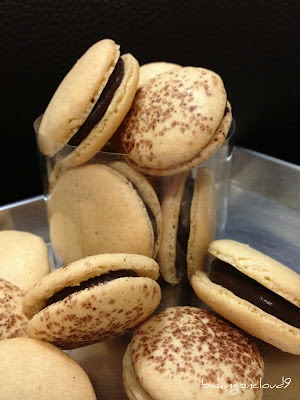 1) Whisk egg white until foamy, and gradually add sugar until glossy meringue. Do not overbeat or it will be too dry.
2) Added sieved almond and powdered sugar, (colour & vanilla bean paste) to the meringue. Give it a quick fold to break some of the air and then fold the mass carefully until you obtain a batter that falls back on itself after counting to 10.
3) Use quick strokes at first to break the mass and slow down. Whole process should not take more than 50 strokes. (To test - if tops flatten on its own, you are good to go. If there is small beak, give batter a couple of turns.)
4) Pipe batter on good baking sheets. Rap the tray 2 times to let any air bubble escape. Sit macarons for 30 mins to 1 hour, until a firm layer on shell forms.
5) Bake in pre-heated oven 150 deg C for 15 - 20 mins.
6) Let the macaron shells cool down and remove from the baking sheet.
7) Spread any favourite fillings on the shell and keep in air-tight containers. Keep macarons in fridge for at least 1 day to let taste mature.

1) Put all ingredients in a bowl and microwave on medium heat for about 2 mins.
2) Stir to mix them evenly and keep in fridge for about 10 mins to harden ganache for easy spreading on macarons.

My eyes brighten when I saw godiva dark chocolate!

ah, i didn't think of using gourmet chocolates for baking usually, as I usually use couvertures! What a luxurious choice!

looking forward to more macarons from you!

Hi Edith,
Oh, so u love godiva too! When I first tasted it, it was wow-so-good!

Hi Alan,
The godiva was 'left-over' and my lazy way of making the macaron fillings...hahaha
Hope I can bake at least another round of macarons this month :D

i've seen some of your previous macarons, yeah,,trials and errors and now i think you're already a mac expert!

even though they are short feet, they still look pretty! and with godiva everything tastes good :)

Hi Lena,
I'm definitely not a mac expert yet, and I still get fail-acarons so many times!

No doubt these beauties will make heads turn. When I see the word Godiva, I laugh out loud. I can't help thinking of the first time I got a box of Godiva chocolate from my Quay Lo. I did not thank him straight away. I asked him how much. LOL!

Hi Quay Po Cooks,
Before I tried Godiva, I knew it was expensive but I didn't know it's so damn expensive in S'pore. Would have got it at a fraction of the price in States, what's more with the variety!