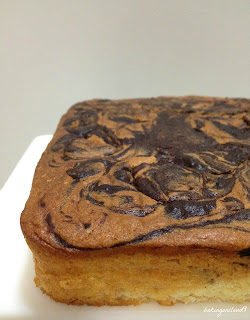 Mrs NgSK's butter cake. First, I saw it at Busy Gran's which made reference to Peng's kitchen and then it lead me to WendyinKK. I was thinking who is Mrs NgSK and there seems to rave review on the butter cake. If you are still wondering who's she, please visit Table for 2...or more for more details. Instead of a plain butter cake, I did a marbled one but I didn't like the not-so-swirls effects. Anyway, I'm typing out the recipe for my future reference. Taste-wise, I'll update it later after I try it out as my breakfast tomorrow. (Update 4 June 2012: Forgotten that I had not updated after the taste-test. Actually sliced and packed in boxes for my colleagues but woke up with a swollen eye the next day and can't go to the office, ended up had to ask hubby to bring for his colleagues. He called in the afternoon and told me that his colleagues would like to place order for the cakes, and said "Are you happy?") 'Nuf said) 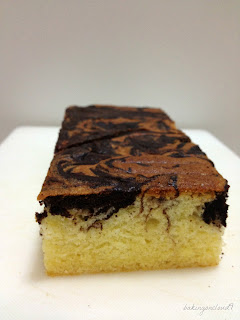 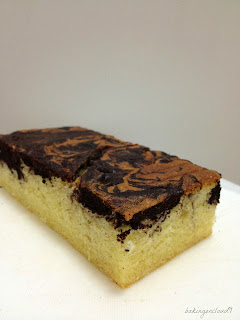 1) Pre-heat oven at 180 deg. Lined bottom of 8 inch square pan and grease the side of the pan.
2) Separate egg yolk and white and set the egg yolk aside.
3) Whisk egg white and 50g sugar in a clean bowl, until stiff.
4) Beat butter and 130g sugar until pale and fluffy. Add in vanilla bean and mix well.
5) Add in 1 egg yolk at a time into butter mixture, and beat well after each addition.
6) Add in half the flour and beat on low speed till well mixed. Add in milk in 2 additions and mix well. Add in the remaining flour.
7) Add half of egg white into the batter and mix on low speed. Pour the balance egg white and fold.
8) Pour batter into baking pan, but set aside about 1 3/4 cups of batter and mix well with cocoa powder.
9) Spoon cocoa batter into the plain batter and using knife to create swirls.
10) Bake for 45mins at 180 deg C or until skewer inserted into cake come out clean. (I adjusted the oven temp to 170 deg C mid-way through the baking.)
11) Allow cake to cool on rack. 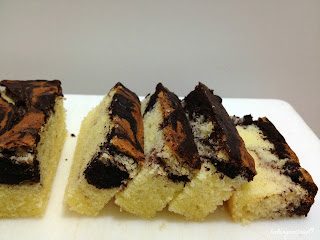 Email ThisBlogThis!Share to TwitterShare to FacebookShare to Pinterest
Labels: cake

Woah! Another Mrs NgSK's butter cake! It's a good one to keep! Great idea to modify into a marble cake!

Hi Lena (from frozen wings),
Sorry accidentally touched 'delete' instead of 'publish' with my fat fingers on iphone small screen...urghhh. Repost your comments here, and yes u gonna give Mrs NgSK's recipe a go!
"i hvnt tried but looks very good in wendy's blog and your one too!"

Hi Quizzine.....good try! me too suck at the marbling but taste is good yah :D

Quizzine..nice try! me too unpleased with my marbling also! but taste wise is good yah! :D

Hi Peng,
U too? Good I've got partner hehehe