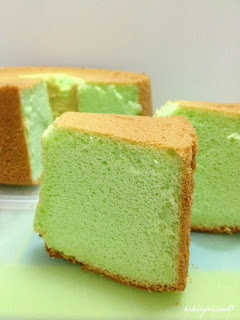 Not another boring pandan chiffon post again?! Throughout my short baking/blogging stinct, THE pandan chiffon cake has been my most "adventurous" where I tried more than couple of different recipes. Isn't it ironic for a so-called common cake? The recipe I'm trying today is one which I've bookmarked for a long time, which originated from ieatishootipost which is a very detailed post/recipe, but Jane had kindly posted a modified and easy-to-read recipe. I'm typing out the recipe for my future reference.

﻿
This is the first time I get a nice brown skin for my pandan chiffon cake, and I think it's probably due to the fan oven used. However, I felt the skin is slighly tough and cake is drier. Perhaps I didn't understand my oven since this is my first time using the fan oven, I'll play with lower temperature and/or shorter baking time to see how the chiffon cake will turn out the next time. 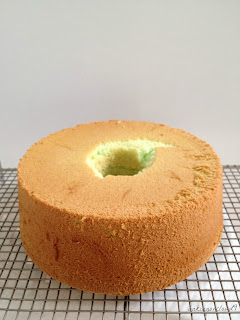 1. Cream (A) until light and fluffy using a hand whisk or electric mixer.
2. Add (B) gradually and mix well.
3. Sift (C) into the mixture and mix well. Set aside.
4. In a separate bowl, whisk egg white till frothy and slowly add in sugar and cream of tartar until soft peak.
5. Scoop 1/3rd of the egg white into the egg yolk batter and fold to ensure that they are mixed thoroughly.
6. Pour the mixture back to the egg white and fold gently and swiftly. I realised that folding by hand is much easier and effective than using spatula.
7. Before pouring the batter into the tube pan, give the batter a few knocks on the table to get rid of air bubbles.
8. Pour the batter into the tube pan slowly and in one direction. Do not grease the pan.
9. Bake in pre-heated fan oven at 160 deg C for 50 mins. (I will try to reduce the temp to 150 deg C for 45 mins)
10. When done, remove the tube pan from the oven and invert on a cooling rack and leave to stand for 2 hours.

Your chiffon colour is so nice. I love the browns.

Hi Jane,
Credits must go to you for the easy to read recipe, otherwise I don't think I'd get to try it out ;))

the texture of the chiffon cake looks so soft and tender!

quizzine,
Your baking skills is good, nothing to do with the recipe I reposted. ;)

posting another chiffon cake is not boring..i never get tired of eating chiffon cakes at all!

Hi Joyce,
It's pretty soft but could have been more moist :)

Hi Jane,
Whatever it is, I still have to thank you! Hehe

Hi Lena,
Hehe... now I get to know another chiffon lover like me :)

This is a very-professional-made chiffon cake! Nice and fluffy... Yum!

i agree with the rest! your chiffon looks really good - i especially like how small the 'holes' of the cake are!

Hi Zoe & Janine,
Thanks for your kind words! Although it taste good, it can be better ;)